Diabetes is a long-term illness that affects the way your body converts food into energy.

The majority of the food you consume is converted to sugar (also known as glucose) and absorbed into your circulation. When your blood sugar levels rise, your pancreas is prompted to release insulin. Insulin serves as a key, allowing blood sugar to enter your body’s cells and be used as energy.

If you have diabetes, your body either does not produce enough insulin or does not utilize it as effectively as it should. Too much blood sugar remains in your bloodstream when there isn’t enough insulin or when cells stop reacting to insulin. This can lead to significant health issues like heart disease, eyesight loss, and renal illness over time.

Although there is no treatment for diabetes at this time, reducing weight, eating nutritious foods, and being active can all help. Taking medication as needed, receiving diabetes self-management education and support, and following health-care visits can all help to lessen the impact diabetes has on your life.

Diabetes can be caused by a variety of factors, including genetics, obesity, and high-sugar diets. There are three main types of diabetes: type 1, type 2, and gestational diabetes. In addition here is the list of all types of diabetes that you should know about. 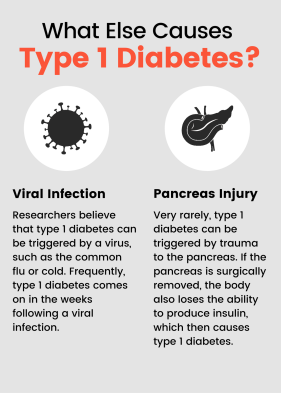 Type 1 diabetes is a long-term disease in which the pancreas produces little or no insulin. Type 1 diabetes has long been thought to be a juvenile illness that manifests in early childhood or adolescence. The illness makes a person insulin-dependent for the rest of their life due to damaged pancreatic cells that are unable to deliver enough insulin to the body. There is no way to stop it. Because insulin is necessary to allow glucose (blood sugar) to enter cells and feed the body, insulin therapy, diet, and exercise are used to maintain normal blood sugar levels. Type 1 diabetes is thought to be caused by genetics and/or organ-damaging viruses. Type 1 diabetes affects around 5% of diabetics. Adults can get Type 1 diabetes, according to doctors.

Type 2 diabetes is a long-term disease that impairs the body’s ability to handle sugar. This is the most prevalent kind of diabetes, in which the body fails to utilize the insulin generated by the pancreas properly (called insulin resistance). The pancreas will typically respond by manufacturing more insulin, but it will eventually be unable to maintain normal blood glucose levels. Some persons are identified with pre-diabetes symptoms (obesity or genetic susceptibility) that can be treated with medicines and lifestyle modifications before Type 2 diabetes develops fully.

Insulin resistance is commonly associated with Metabolic Syndrome, a collection of symptoms that include high blood sugar, high blood pressure, high cholesterol and triglycerides, as well as excess fat deposits around the waste. Type 2 diabetes can be controlled with medication and, in some cases, reversed by making significant lifestyle changes.

According to research, extra weight and the beginning of Type 2 diabetes have been linked to an increased risk of Alzheimer’s disease and other types of dementia. Neuroscientists have found a gene (APOE4) as being present in more than half of Alzheimer’s patients. This gene causes the brain’s insulin processing to be disrupted. The brain is our most energy-hungry organ, using 20% of the body’s total energy output. Because fatty acids cannot be utilized for energy by the brain, blood glucose/insulin function is critical for normal brain function. High blood sugar levels can cause chronic inflammation in the body and brain.

According to researchers, this inflammatory process has been related to the production of amyloidal plaques and tau tangles, which are abnormalities associated with Alzheimer’s disease and other types of dementia. 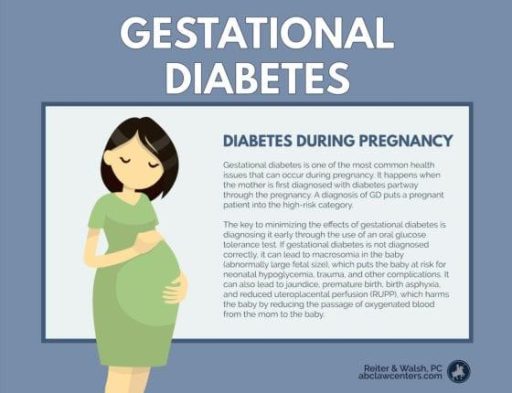 In the United States, more than 200,000 cases of gestational diabetes are diagnosed each year. High blood sugar levels can be caused by placental hormones, which generally develop in women around week 24 of their pregnancy. Because there are no warning signals that this kind of diabetes would develop, it is critical to check for increased blood sugar levels throughout pregnancy. Diet and exercise are two treatment options. Medication may be recommended if blood sugar levels are excessively high.

Obesity and Type 2 diabetes are more likely among mothers with gestational diabetes and their infants later in life. When gestational diabetes is not managed properly, infants are frequently delivered overweight and with jaundice. Asians, American Indians, Indigenous Australians, and Pacific Islanders are among the ethnic groups most at risk. 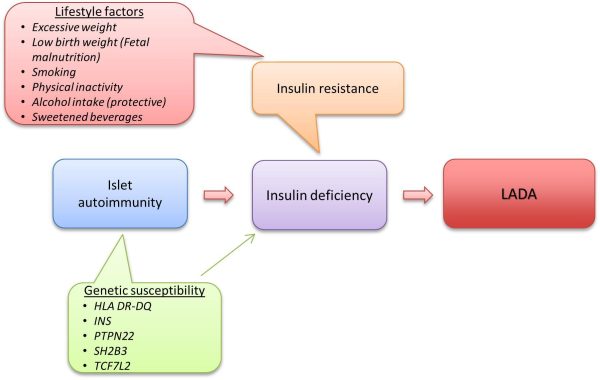 Adults with latent autoimmune diabetes are now recognized as Type 1 diabetes that develops in maturity (typically beyond the age of 30) and progresses similarly to insulin-resistant Type 2 diabetes. LADA is associated with the same genetic and immunological features as childhood-onset Type 1 diabetes, according to studies published by the National Institute of Health; it also shares some genetic features with Type 2 diabetes, raising the question of genetic heterogeneity predisposing to this form of the disease.

LADA develops when the pancreas stops generating enough insulin as a result of an autoimmune illness that destroys the pancreas’ insulin-producing cells over time. Diet, exercise, and oral medicines are recommended, but insulin injections will be required when the body’s capacity to generate enough of the hormone deteriorates. 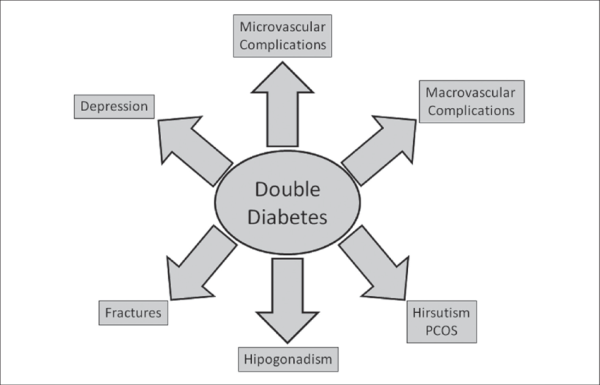 When a person with type 1 diabetes develops resistance to his or her insulin treatment in the same way that someone with type 2 diabetes does, it is known as double diabetes. The pancreas is not only unable to generate enough insulin to sustain normal metabolism, but the body also ceases to respond to the same quantity of insulin given. Unfortunately, children with Type 1 diabetes who are overweight or obese are more likely to develop this disease.

Experts think that Type 1 diabetics, particularly those with a family history of Type 2, should make positive lifestyle adjustments to prevent weight gain and engage in muscle-building activities to lower their chance of problems from double diabetes.

Any kind of diabetes (including a diagnosis of pre-diabetes) should be treated as a significant health concern, regardless of the label. Not only does it appear that there is a direct relationship between blood glucose management and the beginning of brain diseases such as Alzheimer’s disease and dementia, but it also appears that there is a link between blood glucose management and the onset of Alzheimer’s disease and dementia. Thirst, frequent urination, increased appetite, unexplained weight loss, hazy vision, and exhaustion are all common signs to look out for. If you have any of these symptoms without a known reason, you should make an appointment with a healthcare expert to have your blood sugar levels checked. Make an appointment with a board-certified physician at either PrimeMED location today to take control of your health. 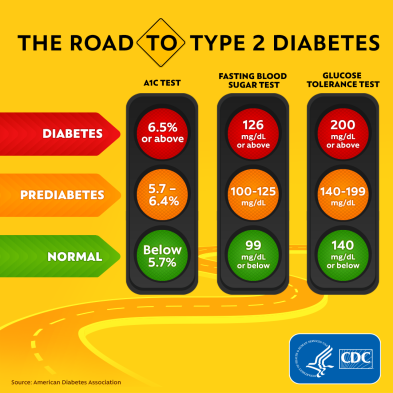 Pre-diabetes is a disorder characterized by elevated blood glucose levels that are not yet high enough to be diagnosed as diabetes. These people are more likely to develop type 2 diabetes, heart disease, and stroke. Weight reduction and moderate-intensity physical activity can help to postpone or prevent the onset of type 2 diabetes. Pre-diabetes affects an estimated 79 million people in the United States. 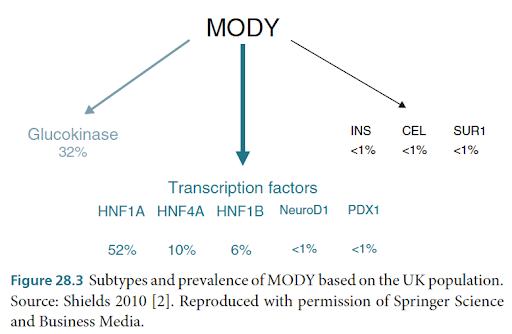 MODY diabetes is an uncommon kind of diabetes that differs from both type 1 and type 2 diabetes and runs in families. MODY is caused by a single gene mutation (or alteration). If a parent has this gene mutation, each kid born to them has a 50% chance of inheriting it. If a kid inherits the mutation, they will most likely acquire MODY before age 25, regardless of their weight, lifestyle, ethnicity, or other factors.

Diabetes in children under the age of six months is known as neonatal diabetes. Because it is not an autoimmune disease, it is distinct from the more prevalent type 1 diabetes (where the body has destroyed its insulin producing cells). 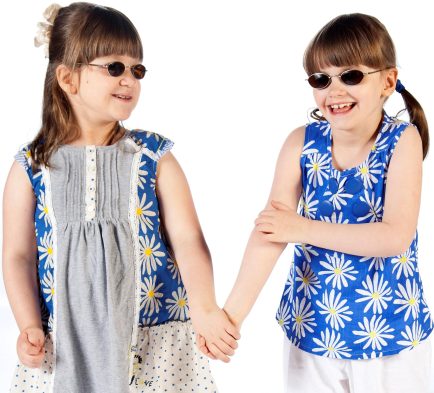 Alström Disease is a rare genetically inherited syndrome with several characteristics in common.

Form 3c diabetes is a type of diabetes that occurs when another illness damages the pancreas. Pancreatic cancer, pancreatitis, cystic fibrosis, and haemochromatosis are among diseases linked to type 3c. If you have part or all of your pancreas removed due to other causes, you may develop type 3c. 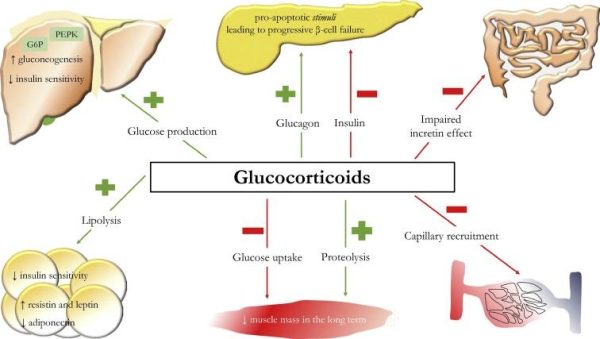 Some persons who take steroids may acquire diabetes later in life. Steroid-induced diabetes is more frequent in those who are at a higher risk of developing type 2 diabetes. 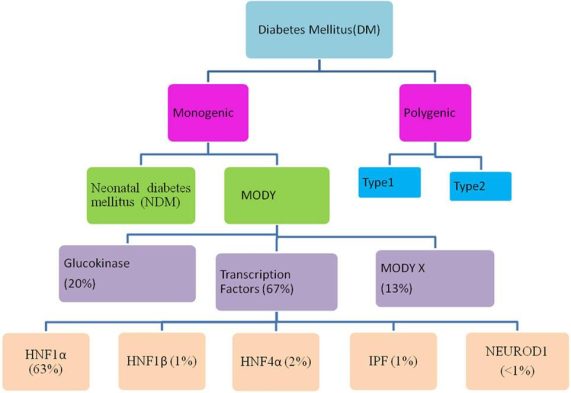 These are uncommon hereditary diabetes types that account for up to 4% of all cases. Neonatal diabetes and young-onset diabetes are two such examples. 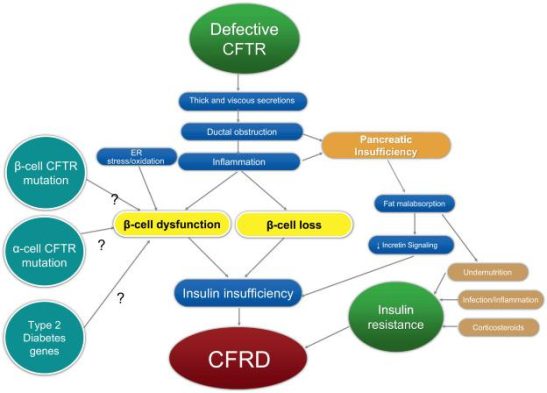 CFRD is unique from both type 1 and type 2 diabetes, but has certain characteristics with both. People with cystic fibrosis are more likely to develop CFRD or have high blood glucose levels as a result of infection or medications such oral steroids or immunosuppressants.

The thick, viscous mucus that is typical of CF promotes scarring of the pancreas in patients. Because the scarring stops the pancreas from generating normal quantities of insulin, they become insulin deficient, just like patients with type 1 diabetes.

This sort of reaction can occur after an organ donation, during HIV/AIDS therapy, or as a result of glucocorticoid steroid usage.